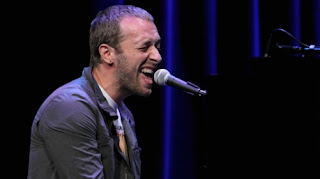 Katy's Half-Time Show was mind-blowing. She took full advantage of the stage with superior special effects. I, for one, didn't know it was technically possible to do some of the creations she presented interpreting some of her songs.

In the TV show, I saw impressive and really fun shows with technical and performance perfection made sublime:Prince and Paul McCartney really connected with the audience with appropriate pomp and fire.  But, Katy's show raised the bar for half-time shows going forward.

Let's hope Chris Martin will do its 50th justice. I like his attitude going in, based on this same TV show (see first sentence in this post). I have just never seen a Coldplay performance that rocked me. They're good and fun, but they have never moved me. I guess I have high expectations for Super-Bowl 50, coming Sunday, February 7th on CBS. Larry and I will be driving towards DC. We'll probably be able to catch the finish at our hotel.
Posted by Kathy Crowley-Gardner at 8:32 PM